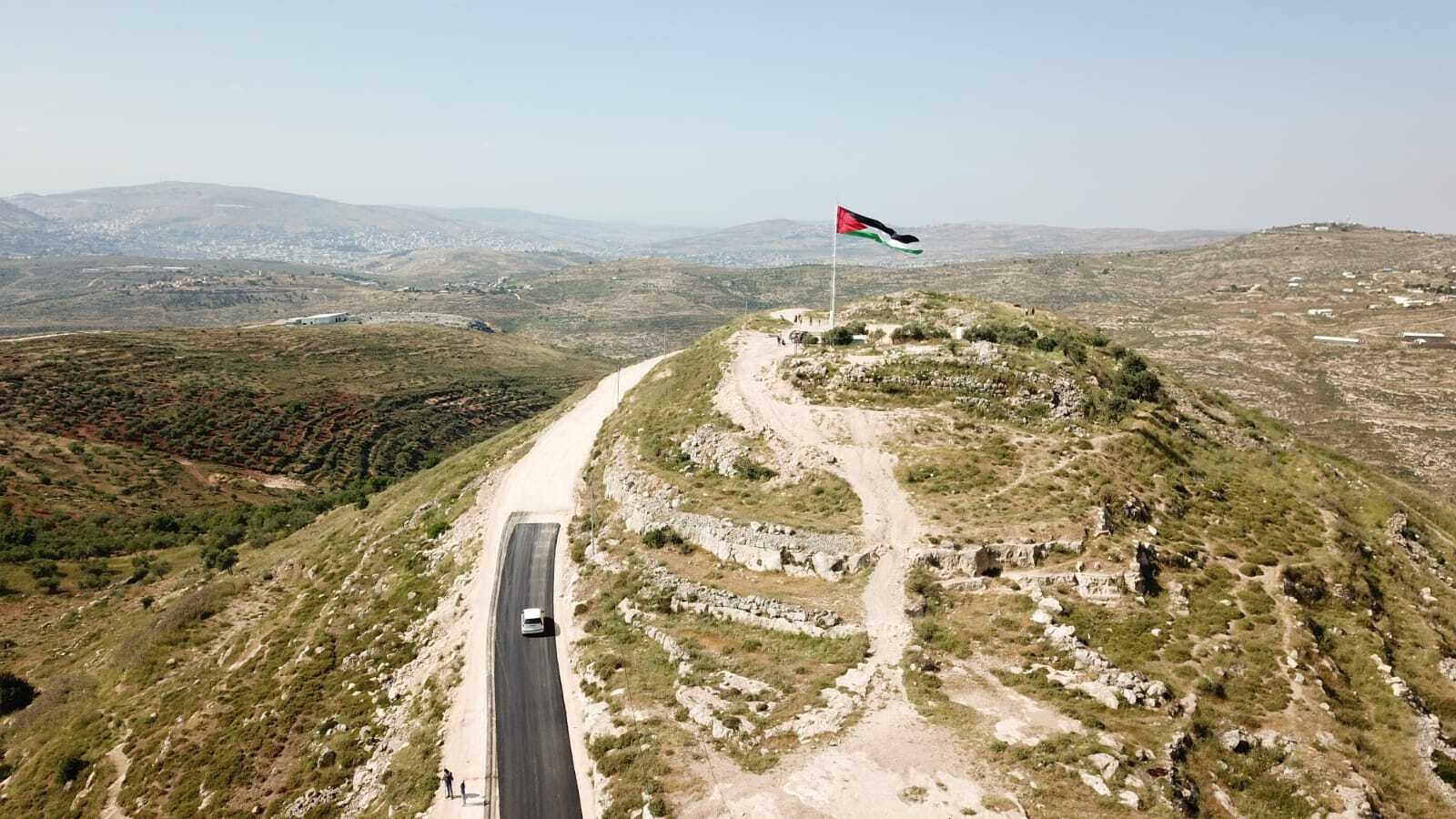 The Palestinian Authority (PA) held over the weekend an official ceremony to inaugurate a “Palestinian” tourist complex in the town of Sebastia in Samaria, the historic capital of the biblical Kingdom of Israel.

The ceremony, attended by PA Prime Minister Muhammad Shtayyeh and other ministers, included the official opening of the compound after two years of extensive construction at the site.

Completely ignoring an order issued by the IDF about two months ago, a 15-meter-high mast was installed at the site, topped by a PLO flag.

The Samaria Regional Council has been working for several months with Shomrim Al Hanetzach, (Preserving the Eternal), a project dedicated to the preservation of the archaeological treasures situated throughout Judea and Samaria, and with the Ministry of Defense and government officials to combat the phenomenon of the PA taking over Jewish historical sites.

Tel Aroma, a Hasmonean-era fortress, Biblical Samaria, and the altar of Yehoshua Bin Nun on Har Ebal near Shechem (Nablus) are some of these sites being taken over and converted by the PA into “Palestinian heritage sites.”

Head of the Shomron Regional Council Yossi Dagan dispatched a scathing letter on Sunday to Prime Minister Benjamin Netanyahu and a series of ministers and IDF and government officials outlining the legal approach they should adopt to combat this phenomenon.

“For a long time now, Abu Mazen [PA head Mahmoud Abbas] and his terrorist comrades have been developing and preparing land at the entrance to ancient Samaria, the site of the historic palace of the Kings of Israel, with significant damage to archeological remains and vandalism,” Dagan wrote in his letter.

Dagan noted that international bodies, including UNESCO, Italy and Belgium, which operate in the site with Israel’s consent, are involved in the vandalism.

Dagan further pointed out that the PA’s operations are being conducted in violation of the Oslo Accords, which state that the PA must maintain archeological sites.

The PA actions are “an active act of organized and planned destruction of an archeological site of great heritage value to the Jewish people and the whole world. This is a cross-border issue with international consequences of damage to heritage,” he said.

Dagan underscored that Israel has the authority and duty to act to prevent the destruction of the site, even though part of the sits is in Area B, under the PA’s control.

The PA’s authority in Area B was “given only to manage civil and municipal matters, and not to damage the property and destroy national and world heritage assets,” he said.

Israel’s Civil Administration has acted in similar instances in Area B in the past, including air pollution and the shutdown of illegal coal factories, even in Area A.

“The State of Israel, as the entity primarily responsible for the area, has a responsibility and must preserve world heritage cultural assets,” he demanded.

“We must not abandon these important sites. The lack of governance in the place disgraces us and undermines our commitment to previous and future generations,” he concluded.

Guy Derech, director of operations at Shomrin Al Hanetzach, said that recent developments at Sebastia are in line with the PA’s official policy of hiding the Jewish connections to the site.

Ancient Samaria-Sebastia is recognized by UNESCO as a World Heritage Site due in part to it being the capital city of Omri and Ahab the Kings of Israel, due to the biblical stories that took place in it, and also the conquest of the city by Yochanan Hyrcanus, the Hasmonean king.

“It is no coincidence that the Palestinian Authority’s official site copies the UNESCO decision regarding the place but omits from it any mention of the Kingdom of Israel, Hebrew kings and so on,” said Derech.

Shomrim Al Hanetzach said that real shame is that the “flag of the deniers of the historical connection of the Jewish people to the land, is hoisted over the capital of the Kingdom of Israel during the First Temple period.”

The PA has previously taken control of Israeli and Jewish heritage sites in an attempt to usurp it of its national identity and legacy, in contradiction to the historical and archaeological findings.

The PA rewrites history according to its political and internal needs and replaces Jewish history with a “Palestinian narrative.”

Get 5 daily news bites direct from Israel!
Sign up:  https://bit.ly/3fD1AmX