Mass Communication - How to Turn the Few into the Masses 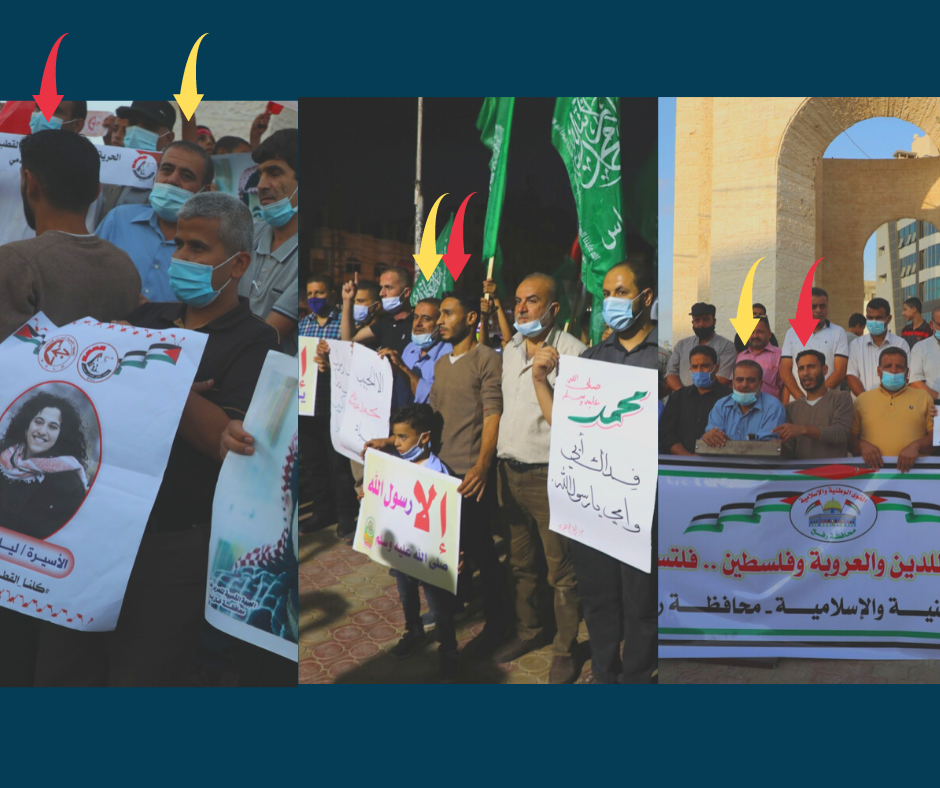 25.10.20, Gaza. In protest of the emerging peace agreement between Israel and Sudan, a demonstration of Palestinian factions is being organized. About 20 people demonstrate in the city square with signs calling on Sudan to reverse its decision to normalize relations with Israel.

Immediately after the protest, another protest. The red flags leave no room for error; this is the Islamic Jihad, demanding the release of Maher al-Akres, a Palestinian prisoner on a hunger strike at an Israeli hospital.

Meanwhile, darkness descends on the city. But in the square - green flags, Hamas, and the calls now are against the French and against Charlie Hebdo which published cartoons mocking the Prophet Muhammad.

All these demonstrations took place on the same day, in the same place. Protest after protest, sign after sign, publicity after publicity.

A normal glance at the photos shows each protest on its own.  A Hamas protest, an Islamic Jihad protest, and a protest by the umbrella organization of the Palestinian factions. But on closer inspection, you can see that although the signs, the flags, and the camera angle have changed, the people - they are the same people.

Why do they do this? Why are Palestinian activists and passers-by replacing the flags, the headbands - changing from red to green to yellow?

The answer is  ithbat vujud or, in English, proof of attendance.

In 2000, during the Second Intafada, there was an ongoing miracle in Nablus. Those were days of armed conflict, terrorist attacks, shooting incidents and an increase in the number of dead, both Jews and Arabs. Every day a number of mass funerals took place in the city. Every death that belonged to one of the Palestinian factions received a respectable funeral attended by tens of thousands of participants. About 50,000 Hamas supporters attend the funeral in the morning, about 50,000 Hezbollah supporters at noon and a similar number in the evening wave Fatah flags.

The Israeli defense establishment tried to understand, how does it make sense that in a city with a population of about 55,000 men, there are more than 150,000 supporters of different factions?

The conclusion of the security officials was ithbat vujud, proof of attendance.

Thousands of participants were recruited for ithbat vujud, called to take part in funerals from various factions with the aim of showing strength, showing presence, scaring the enemy - we are many. The message is intended for the international media and the general public, watching around the world.

The Role of Media in Propaganda

As far as the media is concerned it is pure profit. The media gets pictures - for one hour’s work, three sets of completely different pictures, a feeling of "we were everywhere". But in practice, it's the same event, the same people, but the overall look is different.

We are used to documenting and photographing what happens in Gaza. Over the years we have learned how photographers in Gaza know how to work with their cameras. How one demonstration turns into three demonstrations in minutes.

All this can only exist with the cooperation of the media. The media gets three different stories in the same place and at the same time. It makes a photographer's life easy. But if the reporter or photographer in the field does not explain the story, does not state the facts - he is simply guilty of doing his job.