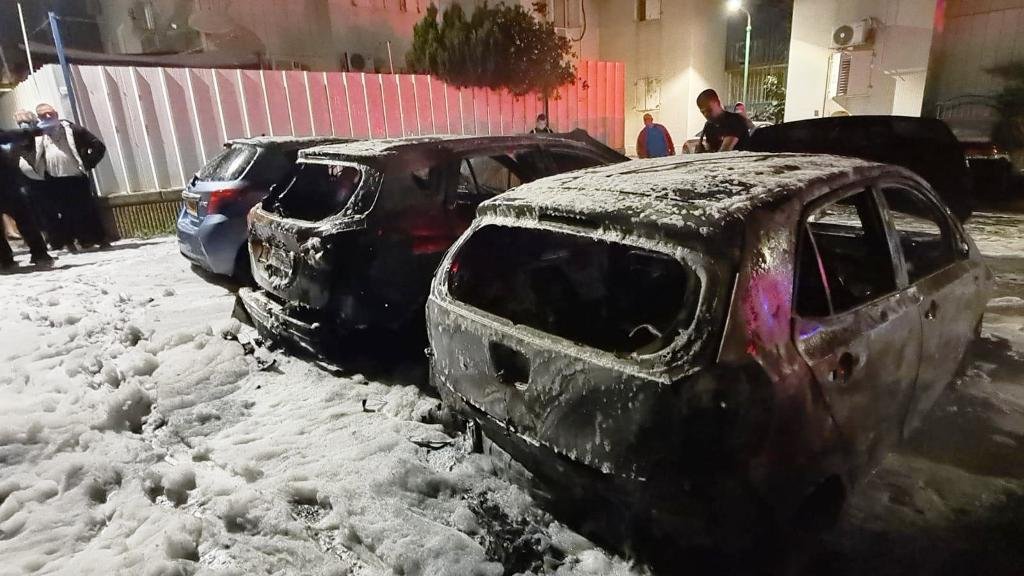 At least six cars and trucks were set on fire in the center of the city of Lod on Wednesday night, a suspected hate crime perpetrated by Arabs against Jews.

Lod’s Mayor Yair Revivo demanded that the Shin Bet security service launch an investigation into the arson while stating that he would persist with his “stubborn, determined and uncompromising struggle in everything related to law enforcement and order” in Lod.

Tensions in Lod have intensified in recent years following the municipality’s determined activity against the illegal construction in the Arab sector and the demolition of tens of illegal structures.

Shooting incidents occur almost on a daily basis in the city, mostly turf wars between rival Arab clans and gangs.

The municipality announced its targeting of Arab crime families, including stopping all municipal service, demolishing illegal structures, imposing heavy fines, disconnecting pirate connections to water and electricity, and “taking determined and uncompromising steps until these families are removed from the city,” the Lod Municipality stated Thursday.

“We will continue to pursue a determined and stringent policy, enforcing planning and building laws, to emphasize clear messages of the rule of law and order as a proper city operating solely in accordance with the law,” Revivo declared.

He demanded that the police increase their presence throughout the city.“City residents should not live in fear due to the incidents of violence and disturbances in the Arab sector in the city, which are one of the main causes of negative migration from the city,” he added.

IDF Inquiry: Soldiers’ Lives Were in Danger in Incident in which Arab Rioter was Shot
Fitting Burial for Hasmonean Royals Concluded on Hanukkah
‘This Saves My Mother’: Jerusalem Sends Artists to Seniors to Alleviate Loneliness in Corona Times