EXPOSED: Network of Cultural Orgs in Jerusalem Funded by Europeans is Run by PFLP Operatives 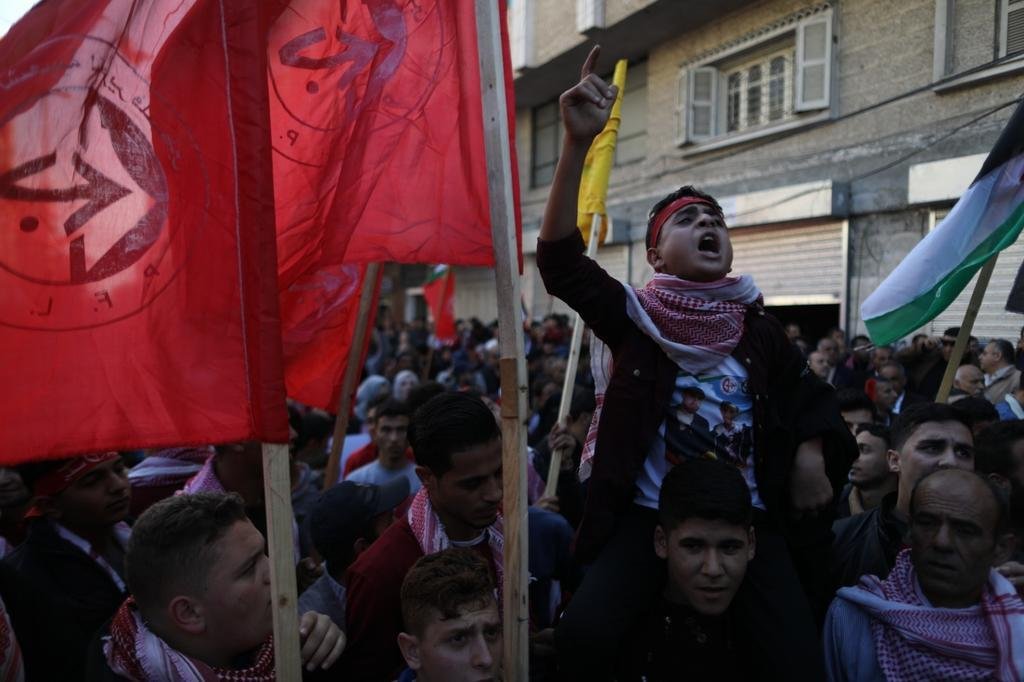 An intricate network of cultural and civilian institutions that is run by activists of Popular Front for the Liberation of Palestine (PFLP), several of them who have served prison terms for acts of terrorism, are directly funded by European countries, TPS has learned.

Five arts centers in Jerusalem have come together and formed a network called Shafaq (Arabic acronym for the Jerusalem Network of Arts, which also means twilight in Arabic).

These cultural centers are five of the most prominent in Jerusalem, including the Al-Ma’mal Foundation for Contemporary Art, the Edward Said National Conservatory of Music, Palestinian Art Court-Al Hoash, Palestinian National Theatre, and Yabous Cultural Center.

A lawyer who knows the institution closely told TPS that the registration of the various offices at one address is also intended to present a false representation of extensive activity and so that they can request extensive financial resources, most of them, it seems, for salaries.

“Jerusalem Nights” is one of the most important folklore and art events in the east of the city and is held annually with the support of the European Union. The audience is mostly Palestinian youth and it seems that the show schedule and content of the activity are all aimed at youth activities.

The entire activity is overseen by Daoud al-Ghoul, 37.

The Yabous Cultural Center is managed by Rania Elias Khoury. The second most important organization in Shafaq is the Edward Said Center for Music, headed by Suheil Khoury.

Muhammad Awar runs the Edward Said Conservatory of Music and the Youth and Heritage Club in Silwan and has been working to establish an art school. He also established a public library in Silwan and a women’s center.

The Israeli police on Wednesday raided their offices and arrested several of them for tax offenses, money laundering and other economic offenses

Supposedly, Shafaq is occupied with cultural and art activities, community development and youth empowerment, but TPS’ investigation reveals that all these managers and others in Shafaq and its affiliates are members of the PFLP, some are active and some are supporters, and several are members of the BDS boycott organizations.

The system of connections and friendships reveals that the organization is involved in almost all civic and community activities on behalf of the PFLP in eastern Jerusalem and is an important crossroads in the transfer of funds to many civic institutions.

Daoud al-Ghoul is a released prisoner, and since his release, he has been active in a long line of seemingly innocent civic organizations, the common denominator of all is the prominent affiliation with the PFLP.

In addition to his role as director of the Shafaq, al-Ghoul serves in management positions in various organizations, including the Denmark House, which funds many of the PFLP’s activities, the Rawa Foundation for Community Development, and the French and Turkish funded Al-Bustan project in Silwan.

Al-Ghoul, who holds a master’s degree from Al Quds University, was a member of the PFLP Health Committees.

Although some publications claim that he left the Committees after his arrest in 2015, a publication on behalf of the PLO from 2017 describes Al-Ghoul as a member of the Health Committees of the PFLP.

As part of his activities in the Health Committees, al-Ghoul was the liaison with France. His ties with the French placed him as an activist in the French-funded Al-Bustan venture. More than a year ago, following protests from Israel, his name was removed from the Al-Bustan website and the French scaled back his activities.

Even before his arrest, in 2014, al-Ghoul’s computers were confiscated by the Jerusalem police for his activities for the PFLP.

Rania Elias Khoury runs the Yabous Center and also serves as the deputy chair of the human rights organization Al-Badil, which is also affiliated with the PFLP and which was recently denied funding from the Europeans over its refusal to renounce its ties to the terror group.

Rania Elias appeared on one stage with Suheil Khoury alongside other PFLP activists and public figures when she recently staged an event in which Khoury’s play was performed, in memory of Ghassan Kanafani, a senior PFLP member who was assassinated by Israel for his acts of terrorism.

Until is was refused funding, Badil received between 2015-2016 a total of $85,320 from the Council of Europe’s Directorate for Human Rights and International Law to “increase access to justice for Palestinians living in East Jerusalem.”

Suheil Khoury is a member of the Political Bureau of the PFLP and is considered one of its senior members and was even a candidate to head it.

In recent years, the Edward Said Center has collaborated with the PFLP’s student cells at Bir Zeit University and, among other things, organized a conference under the auspices of the university to support Palestinian prisoners, centered on the figure of Ahed Tamimi, and her father was invited to speak.

Samar Abu Aisha, the marketing director at Shafaq, is a released prisoner and a PFLP member. Before being arrested, Abu Aisha refused to turn himself into the Jerusalem police and went on a hunger strike at the Red Cross offices.

Adamir is funded by the Denmark House, which serves as a conduit for the transfer of funds to the PFLP.

Muhammad Awar, who holds a bachelor’s degree in business administration from Bethlehem University, is also identified with the PFLP

Awar, like Al-Ghoul, is a member of the Denmark House that finances a large part of the PFLPs activities in Jerusalem.

The Al-Ma’mal Foundation for Contemporary Art operates under Shafaq and recently hosted Bissan Abu Aisha, who was accused of smuggling radios to security prisoners in prisons and now heads Radio Beer Sheva, which operates from eastern Jerusalem.

The Hidden and Forbidden Ties to the PFLP

The PFLP is not the largest organization in the Palestinian arena, but in recent years it has been leading civic activity in eastern Jerusalem and is even overshadowing Fatah and Hamas.

TPS findings show that the PFLP’s activities are made possible due to the huge budgets that flow to Shafaq from various European countries and the European Union, and are the result of from the intricate ties created by the PFLP’s frontmen in Europe and from a complicated network of innocent-looking civic organizations.

A source in the east of the city told TPS that in recent years the differences between Fatah institutions and the PFLP institutions in Jerusalem have blurred and many times the civic institutions cooperate.

Among other things, he notes, Shafaq maintains extensive cooperation with the Palestinian Authority and with Fatah activists and institutions that have split from the Orient House. Abed al-Qader al-Husseini, the son of Feisal al-Husseini, serves on the board of directors at Shafaq alongside well-known public figures from Fatah, but also alongside Suheil Khoury, a senior PFLP member.

Civilian Institutions as a Disguise for Terrorism – the PFLP’s Modus Operandi?

Many organizations affiliated with the Popular Front serve as the base structure of the BDS boycott organization against Israel and it appears that the Front using a method of operation designed to disguise the activities of its people and ensure them sources of income, legitimacy and disguise for activity.

The PFLP terrorist cell that murdered Rina Shnerb in a bombing in august 2019 was also involved in the civic organization of the Popular Front. Samer Arabid, the head of the cell, was part of the organizational management team of the Palestinian agricultural committees, which are supported by France and European countries.

Arabid was also the CFO of a number of BDS organizations such as Adamir and the Union of Agricultural Work Committees (UAWC).

The squad was commanded by the PFLP headquarters’ Abed al-Razak Faraj, who was Arabid’s predecessor as finance director at Adamir and who confirmed the authorized the attack.

Shafaq was founded in 2017 and according to a lawyer who asked to remain anonymous, this step is intended to streamline and coordinate the procedures for receiving funds from institutions in Europe and especially Sweden, and for this purpose a three-year plan worth $ 4.5 million was prepared to fund the cultural institutions in Jerusalem. All the money comes from Sweden through the SIDA fund.

According to the EU declaration from 2018, more than 15 million euros are invested every year in the various projects in eastern Jerusalem, including the Shafaq.

Documents indicate that in 2017, Sweden alone, through the SIDA fund, supports the activities of Shafaq and its subsidiaries in the amount of 30 million kronor, out of 42 million kronor that Sweden distributed to institutions in the eastern part of the city.

As of the time of publication of the investigation, Shafaq did not respond to TPS’s questions regarding its ties to the PFLP.