Battle of the “Yids”? Tottenham Hotspur and Maccabi Haifa in Emotional Encounter 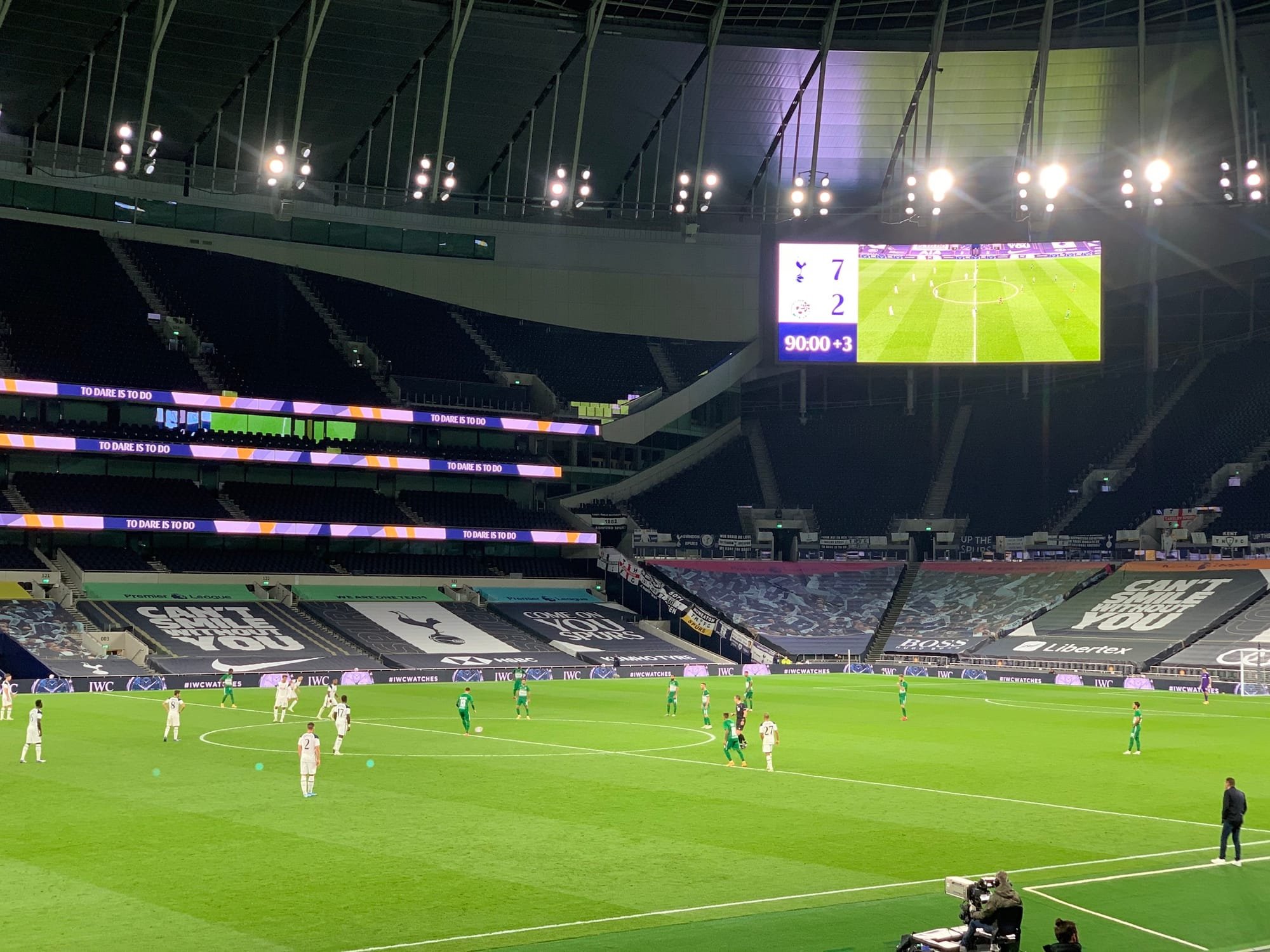 In the final play-off match to qualify for the UEFA Europa League, Tottenham Hotspur emphatically saw off Israeli top-table team Maccabi Haifa. And yet, the 7-2 result may not be the most interesting side to this game: TPS explores Tottenham’s Jewish roots.

Tottenham, North London. Where normally on such a Thursday night there would have been action, anticipation and nerves, and half-and-half scarves sporting the green of Maccabi Haifa and the Lilywhite of Tottenham Hotspur on sale, there was silence. The pre-match buzz of the streets and the ecstatic outbreaks of joy or the downtrodden streams of frustration and anger after the game: Stadia and their surrounding communities around the world have been stripped of the raw emotion they have been accustomed to by the Coronavirus-pandemic. With England no exception and games being played behind closed doors, it was a sorry affair for what could and should have been a highlight for many Israeli football fans.

The game itself was, as the 7-2 result suggests, a blissful affair for the Tottenham faithful. Spurs (the nickname of the London team) superstar striker Harry Kane, having previously been taunted by Haifa midfielder Mohammad Abu Fani in a well-publicized video, gave the London side the lead within two minutes. “The Greens” from Haifa, however, found an equaliser through a beautifully dipping long-range effort by Tjaronn Chery fifteen minutes later, before falling behind to a Lucas Moura header on 21 minutes in an end-to-end opening.

End-to-end football. With one clear winner

Haifa, desperately trying to exert their grip on the game and claw back hopes of qualifying for the group stages of the UEFA Europa League having beaten sides from Bosnia, Kazakhstan and Russia in the lead-up to their clash with Tottenham, soon saw their hopes slip away as midfielder Giovani Lo Celso scored two goals in quick succession to give the Londoners a 4-1 half-time lead. While the score after 45 minutes may have been flattering for Spurs, the difference in quality between the two sides was omnipresent.

While a Nikita Rukavytsya penalty gave Haifa a lifeline following a Matt Doherty handball, Tottenham once again only needed minutes to respond with Harry Kane scoring a penalty – this time following a handball by Maccabi.

The Israelis tried to stage a comeback, having a goal disallowed for offside just after the hour mark but proved too weak for a Tottenham side that saw Harry Kane score a hat-trick on 74 minutes and Dele Alli score from the spot after a clumsy challenge in the 90th minute to make it 7-2.

With nine goals scored, a Haifa attempt disallowed, three penalties and a Harry Kane hat-trick, it became obvious that whilst the match-day energy has been sucked off the North London streets, there was no sign of falling energy levels on the pitch.

More than a football match

And yet, with all the sporting bravado on show, for many football supporters in North London and throughout Israel, the allure of this match played in a freezing Tottenham Hotspur Stadium by a red-hot Spurs team and lackluster Haifa was not simply watching a football match. To many fans, this football match – only the second competitive game between Tottenham and an Israeli side – was special.

Located in North London, home to around seventy percent of the Jewish population of the UK and a mere ten minutes by car away from London’s Stamford Hill, a neighborhood boasting the highest concentration of Hasidic Jews in Europe, Tottenham has long been viewed as a Jewish club (or at least one with Jewish heritage) in the international footballing community.

With rival supporters associating Tottenham and its fans with Judaism, the question of how Jewish the club is has become somewhat of an unanswered question. The geographical and historic ties are there. Yet whilst Tottenham’s chairman Daniel Levy may be Jewish, and many Jews in London support the team (an equal number, however, support Tottenham’s neighbors and bitter rivals Arsenal who do not have a “Jewish label” attached to them), the question posed is no longer: Is Tottenham a Jewish club? But rather, owing to ongoing (verbal) attacks on Tottenham fans: How do (non-Jewish) football fans respond to anti-Semitic slurs aimed at them?

In Tottenham’s case, many of its fans – although not uniformly decided upon or endorsed – attempted to turn the abuse around. Having been abused as “Yids” for decades, Tottenham fans started using the term as a form of self-description, hailing themselves as the “Yid Army” and sporting references to Judaism and the State of Israel – most commonly in form of Israel’s flag or variations of the club’s logo including the Magen David.

Yid – “A supporter of or player for Tottenham Hotspur Football Club”

“If we can’t beat anti-Semitism, we shall embrace our Jewish heritage – whether true or folklore – and take a firm stance against hatred of Jews,” the supporters’ motto seems to have become. Such is the identification with Jewish symbolism and terminology, that the Oxford English Dictionary this year decided to include the term “yid” in its latest edition, defining the word “a supporter of or player for Tottenham Hotspur Football Club”.

Even amongst Spurs fans, however, the use of such terminology is controversial, with some supporters believing the increased use of the word will – perversely – further increase anti-Semitism. The club agreed, criticizing the Oxford Dictionary for the inclusion of the term, naming it “misleading”.

And yet, whatever one’s personal views on the matter are, there is no denying: Identification as Jewish plays a large role in the self-perception of many Tottenham fans, both non-Jewish and Jewish. As mind-boggling as this may seem, it is obvious that anti-Semitic taunts against the club’s supporters have brought them together in fostering a resilient mentality against anti-Semitism laced with bitter sarcasm.

A famous example for this mixture was seen and heard following the signing of German striker Jürgen Klinsmann in 1994, when Spurs fans sung “Chim chiminee, chim chiminee Chim Chim churoo – Jürgen was a German But now he’s a Jew!” to the tune of a song in the Mary Poppins musical.

Identity politics gone crazy or an attempt at fighting anti-Semitism? In North London, the view on the matter depends on who you ask. One rabbi who frequents Tottenham’s trips to foreign European countries for away matches, is clear about his opinion: Cheering his team on, he celebrates the “Yid Army”. With not a single Jewish player in the team, it seems that in North London you need not be Jewish to be Jewish.